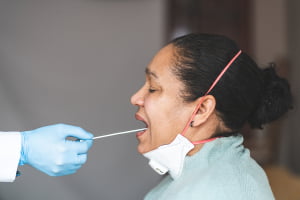 A secure digital health passport system costing £15 per head could hold the key to reducing social distancing at sports and entertainment venues, according to Manchester-based developers, VST Enterprises Ltd.

HealthCare Global reports that the COVID-19 Rapid test, which involves pricking the finger to draw blood takes one minute to administer, and results are delivered in 10 minutes. There is a 97.5 per cent accuracy rate in tests for early-stage infection, acute-phase infection and post-infection for the production of antibodies.

The user would download the V-Health Passport app onto their smartphone, enter their details, and then the app verifies a person’s identity from their official passport document which has been uploaded and then compares the person’s identity using facial recognition.

The app works on a traffic light system – red for those who test positive, green for those who have tested negative and amber indicates a countdown trigger date to the next test date. Tests are valid for two weeks, and the validity period of the passport is at the discretion of the test, and ultimately the company or governing body that endorses it.

VST Enterprises Ltd has submitted its proposals for pilot tests, called Fans Are Back, to the Department of Digital, Culture, Media and Sport, with spectators set to return to venues on a socially distanced basis from October 1.

Attendees would be tested for the coronavirus in the days leading up to an event, and if the test is negative, their unique digital passport would be scanned and verified by venue officials from a distance of up to 100 metres.

Teams and governing bodies are united in the view that it is not financially viable to open venues at anything below 50 per cent capacity, so a secure technology solution, coupled with a rapid testing kit, is vital in getting fans back into stadiums. Premier League clubs are understood to be keen to be involved in trials with spectators during upcoming pre-season friendlies.

VST Enterprises Ltd chief executive Louis-James Davis is confident that the passport would be viable for even the largest venues at full capacity, and those in attendance would be reassured that the ‘bio-secure environment’ meant they were safe from infection.

Davis explained that the £15 cost covers everything – the testing, administration of the passport and the bio-security checks at venues – and believes that even in the absence of a sponsor subsidising that, supporters would be prepared to pay more.

He added there was the likelihood that clubs concede to absorb the cost, as, without the revenue from spectators, clubs cannot exist on advertising and sponsor revenue alone