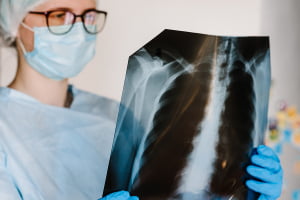 A four-year study by the University of Strathclyde has developed a medical image processing framework that matches up information and scans from varied sources to present a clearer image to help oncologists treat lung cancer tumours with greater efficiency.

The research, in partnership with NHS Greater Glasgow and Clyde, retrospectively studied resected tissue from nine lung cancer patients who had been treated using radical surgery, according to a press release from the University of Strathclyde.

The study has been funded by the Engineering and Physical Sciences Research Council’s Centre for Doctoral Training in Applied Photonics and the Beatson West of Scotland Cancer Centre in partnership with the Beatson Cancer Charity.

There are 130 new cases of lung cancer, the third most common type of cancer in the UK, diagnosed daily, and in most cases, the treatment decisions made are based on the patient’s clinical history and from visual information from CT and PET scans.

A CT scan provides information on tissue density, and a PET scan uses radioactive tracers to help identify areas of high metabolic activity in the body, but the produced medical images only provide partial information about cancer, leaving the only sure way to confirm findings is by comparing the scans to the actual cancerous tissue.

Dr Gabriel Reines March, a doctoral graduate from Strathclyde’s Centre for Signal and Image Processing, explained that the project has developed a framework for the registration of pre-operative scans from lung cancer patients with images of the actual cancerous specimen.

“By matching these sources of data, researchers can investigate which features in the scans relate to which specific traits of the tumour. A unique aspect of this study is that every step in the framework, from tissue dissection to validation of the results, has been developed by a multi-disciplinary team of engineers and clinicians,” he said.

“This has resulted in a translational project targeted at solving an unmet need within the NHS.”

The framework will allow clinicians to spatially match information from various pre-operative scans and the physical tumour to gain a better understanding of the disease.

Tumours can often be surrounded by inflammation, which is not cancer, but will show a similar response to a cancerous region on a PET scan. If an area of inflammation is treated as a tumour, then the patient will be unnecessarily exposed to high energy radiation, causing damage to healthy tissue.

The framework will help reveal how particulate information on the scan is related to the pathology of the tumour and the surrounding tissues, leading to an improvement of treatment effectiveness.

The result of the project was reviewed by two independent clinicians who were asked how they would proceed without the assistance of the algorithms, as well as being presented with four different anonymous results – including the study method, their own, a colleague’s, and a non-expert.

In two out of three cases analysed, the clinicians blindly picked the algorithm as providing the best solution.

The next step is for clinical trials, which will utilise another type of PET scan to provide more precise information on the tumour.

If you are looking for cloud healthcare imaging solutions, get in touch today.