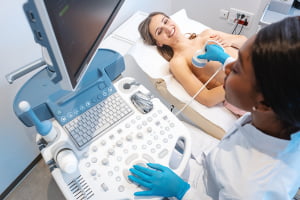 A group of scientists from 13 hospitals in China have trained a deep learning algorithm to detect cancerous tissue from a range of ultrasound images which could speed up the detection of cancer and help save lives.

The study, published in the Chinese Medical Journal, used over 15,000 images acquired through medical image transfer to train and test three different neural networks to look for malignant and benign tumours, making it the largest multicentre study on breast ultrasounds ever undertaken.

Regardless of the images used, the process was the same for each network and was divided into two specific tasks. The first was detection, which looked for where and how large the tumour was in the original image, and extracted that part of the image.

After this, the second process was classification, which takes the information about the detected lesion and divides them into one of four categories;

The networks used had an accuracy level of 88 per cent, itself impressive but when the system was tested against 37 experienced ultrasonologists, the system was even more remarkable.

Compared to the doctors’ average accuracy of 30 per cent, with an average time of just over five minutes (314 seconds), the AI achieved an accuracy level nearly three times that (89.2 per cent) in just under two seconds.